This weekend was great. It was the first time I actually bought my fruit and veg from a farmers market. Great may seem like an over exaggeration because obviously I realise people do this all the time; fresher produce, bargain prices (although you do have to buy in bulk to get the best of these), someone really enthusiastic about carrots and turnips that is extremely high spirited considering they’ve been standing in the cold for hours... Are just some of the reasons people choose to shop at their local farmers market. However, for me it was a new experience, I went to the market on a whim, something to do on a Saturday afternoon (I mean the supermarket is just so much more convenient as a place to shop). And the guarantee of an excellent lunch, thanks to the endless food stands at Borough Market, was also an unashamedly major factor! But the market offered so much more; I was charmed. Who would have thought muddy green tomatoes and freakishly long spring onions could be so inviting? But they were. Maybe it was the abundance appealing to my gluttony, or the array of colours in every direction making me feel like a kid in a sweetshop. Either way, shopping in a farmers market is a hundred times more fun than a supermarket. What’s more I wound up buying things I don’t usually find in my supermarket basket, ingredients that never really appealed to me before. I anticipate a creative week ahead trying new recipes, or old ones with new ingredients. And those of which are successes are sure to end up here on my blog!

A primary feature of any great weekend has to be a great meal and I think savoury pancakes could easily fit the bill. A late Saturday brunch, lunch with friends, a starter or light main course; this dish can be whatever you want to make of it. As an added bonus, should you have any pancakes left over, you have the perfect dessert waiting in the wings! 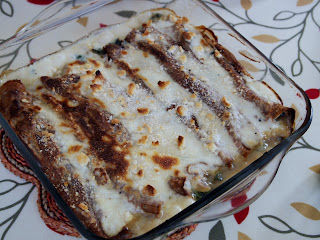 For the pancakes:-
I use my Mum's egg-less recipe, and like all Mums she doesn't measure a thing! So I have attempted a conversion into metric terms, but a little adjustment may be required to get the pouring consistency (that is adjusting the flour or milk content).
1 bowl self raising flour (about 450g)
3/4 glass of cold milk (about 350 millilitres)
1/4 tsp bicarbonate of soda 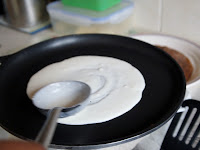 Let the mixture rest for at least five minutes. Then get going... melt a knob of butter in a flat frying pan. Ladle in some pancake mix, swirl the pan around so you get a decent sized pancake.  It will take about 50 seconds to cook on the first side, check by loosening one side and peaking underneath. Once there's a bit of colour it's ready to flip. It's up to you which flipping method you use (excuse the pun), but just get the pancake cooked on the other side!
This mixture should make enough pancakes for the recipe (8). If all doesn't go to plan... you can always cheat a little and get some ready made pancakes. Lucky for me, my flatmate is a faultless pancake flipper! 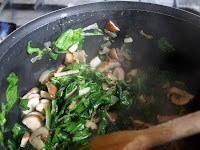 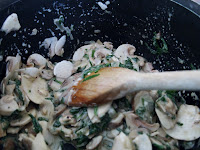 Next make the filling. Sauté the onion in a tablespoon of olive oil. After about five minutes once the onions are softened add the mushrooms and the thyme. Make sure the pan is on a medium heat so that the moisture from the mushrooms does not collect in your pan. Once the mushrooms have shrunk and are almost cooked, fold in the spinach and cheese. Add a good pinch of pepper, don't add any salt at this point as goats cheese is quite salty. Once the spinach has wilted, switch off the heat and let the mixture cool. Check for seasoning at this point, and add salt accordingly (I find it's usually just fine due to the goats cheese, but I might add a squeeze of lemon). 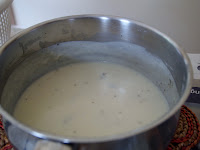 To make the bechamel, simply melt the butter in a stainless steel pan. Add the flour and whisk until the rue turns a golden colour. Add the milk in one go and keep whisking on a medium heat until the sauce thickens. Once thickened (it will take about 5 to 7 minutes) sprinkle in a good pinch of nutmeg.

To assemble, place an eighth of the mushroom filling down the middle of each pancake. Fold over into a wrap and place side by side in a baking dish. Pour the sauce over the pancakes. Sprinkle with some grated cheddar or Gruyère and bake in a pre heated high oven (about 200°C) for 20 minutes.

These pancakes are at their most delicious straight out of the oven, so don't hang about!

Posted by Sita No comments:

Firstly, Happy New Year! It always feels a bit weird saying that now we're almost two weeks into the new year, but there you go (and I  know I will be saying it a lot more come Monday when I return to uni!). For most people the new year means new beginnings... And how could I not mention those impossible new year's resolutions! Eat more healthily/ Do more exercise/ Stop swearing/ Be more organised/ Blah blah blah. I stopped making new years resolutions a few years ago, primarily because they were impossible to keep! But I do still like to make changes and new resolutions in my life when I feel like my life is getting too monotonous or heading in the wrong direction.  Sometimes at a low point during the year, sometimes when I'm sat in front of the TV thinking I could definitely be doing something more productive than this. Never anything as ambitious as "eat more healthily", nor as vague.  Something small, which over time can make a significant difference in my life or may just fizzle out having done its work leading me from the woes of monotony.
It was a small change that led to this blog... and who knows where this will take me!

So in the spirit of ignoring those new year diet fads and January detox salad pickers, here's a recipe inspired by some new techniques and recipes I came across over the holidays (and sorry, it's the antithesis of fat free: CHEESE!): Mediterranean blackened sweet peppers, South American chimichurri marinade and a favourite in any Indian household, paneer (indian cheese)!
The blackened sweet pepper is what excites me the most about this recipe. It feels so wrong to grill a pepper until the skin turns back, I mean it's basically burnt! But peeling off the burnt skin reveals the softest, most intensely sweet pepper tasting flesh you'll ever try. I know you can buy these already done for you in jars, but where's the fun in that!?

This is a brilliant starter dish or a side for a main course. The sweetness of the pepper works especially well with the heat of the chilli. If you haven't tried paneer before, this is a great way to try it. Simple and delicious! 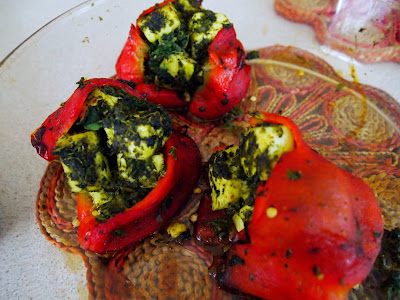 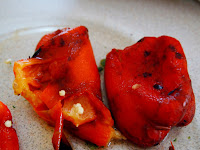 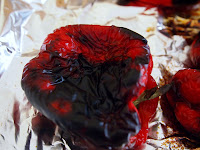 Start by blackening your peppers. Simply stick them under a grill turned up to its hottest temperature. Turn as soon as the first side is blackened. Keep turning until all sides are blackened. Alternatively you can achieve the same effect by turning the peppers on an open flame or a really hot pan without any oil. Once the peppers are blackened. Let them cool for about 5 to 10 minutes then, peel off the skin and remove the stem and seeds. 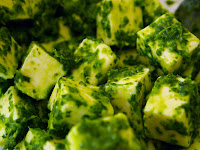 Next, make the chimichurri marinade. Simply whiz the coriander, parsely, chillies (add according to how hot you like things), oil, water, lemon juice and a pinch of salt and pepper in a blender until everything is combined into a liquid consistency.

Now, marinade the paneer in the chimichurri. (Hold about 4 to 5 tbsp of chimichurri back.) Coat each cube of paneer then cook in a dry pan for about 5 minutes on a medium heat until the paneer has softened. Add the spinach and keep tossing together until its completely defrosted. (Or if you're using fresh, cook until the spinach has wilted slightly.) 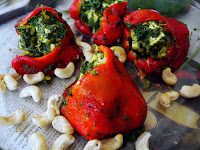 For the final assembly, just split the paneer mixture into four equal parts and stuff each pepper. Don't worry if the pepper splits in places, but try to keep it as intact as possible! These can be put in the fridge and kept for later or cooked immediately. To cook simply bake for 15 to 20 minutes in a preheated oven at 190°C. 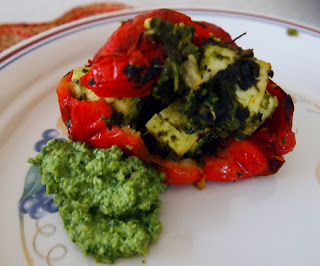 This is definitely a recipe to try, a definite crowd pleaser!


Until next time...
Posted by Sita No comments: